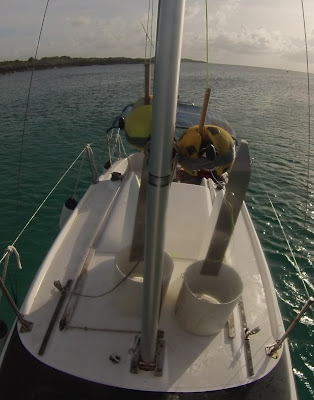 There are 2 paravanes with 2 yellow balls. Inside each ball is a fishing reel that can let the line out for the paravane automatically. This lets me toss in both paravanes at nearly the same time.


This video is the whole experiment. The left side reel let the line out at a slow speed. The right side must have had a higher drag setting on the reel as we had to move a bit faster to get it out. Eventually the fishing line knot on one of the reels came undone. I need to get better at fishing line knots. But the system for letting the lines out is getting reasonable.

One of the paravanes has been filed so that it stays down in the water better. I thought I had done the other but had not. Both of them came out of the water, so they're not the ultimate design.


My 11 year old son Ethan has become my crew.  He is learning fast  He is a great help to me!  This experiment was done on Monday July 15th.  We tried 2 paravanes a couple days before this but it lasted less than a minute, and we did not get video. 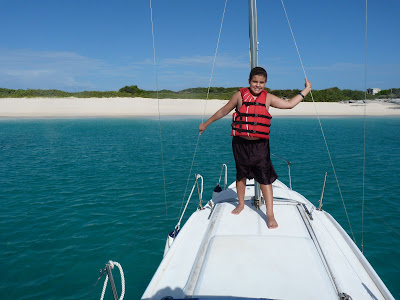 Here is the view from Ethan's camera:

After a line comes loose we both have to focus on getting things out of the water.   One of us driving and the other grabbing things with the mooring hook.   So far we have always recovered everything.  The side that has not come loose we just wind in with the reel in the ball.   But we still have to get the paravane onboard and then stow things.   Anyway, no video of the recovery work.  :-)
Posted by Vincent Cate at 4:05 PM