I made another hook paravane where the aluminum extends forward under the foam.   This lets me attach the string forward more. 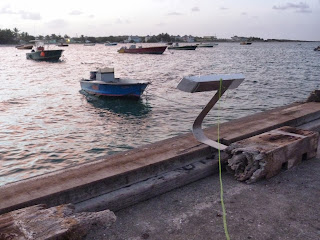 Some videos.   The Sun was going down at my wave tank.


Posted by Vincent Cate at 7:51 PM No comments: 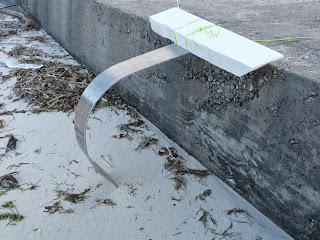 I read about a hook paravane some time back but did not fully understand it.   I decided I understood enough to make one that would work so today I made one and tested it.  At first the curve was not tight enough and it could not go fast.  After bending it a bit more it worked well.  It is mostly off to the side, like a good paravane (water kite) but a bit behind.  Because it is a bit behind the lower part acts like a plow pulling the paravane down into the water.  The upper part is positioned to lift if the paravane goes too far down into the water.  So the two balance each other and it does not go down too far or pop out of the water.  This is a very light device.  This makes pulling it out of the water and onto the dock or boat much easier.  It will also take much less space on the boat.  The maximum pull is less, so I am hopefull that it will not break the line when the mast pulls hard. 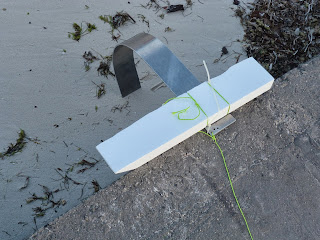 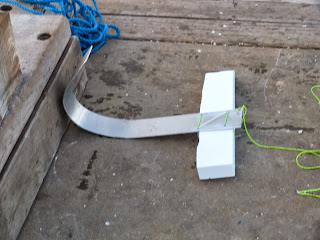 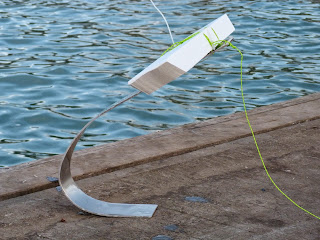 This was the shape after some more bending and it worked well.
I had to start out slow.
This last video is with the most curve in the aluminum.  It seems to work the best.  I don't think this will ever jump all the way out of the water, so it will always keep tension on the mast.  This is much better than my pipe prototypes.

This design has great potential.  It is also really easy to make.  I now expect the final paravane design to evolve from this basic design.  In the past I have gone from toy sailboat, aluminum foiling catamaran, to pipe, to this hook.  These are big changes in design.  From now on I expect small changes to the basic hook design.  This is a very efficient design.  Lifting my big pipe paravanes back onto a tipping boat was a bit much.  This will make for a much more practical device.  Also, because it is so light there is far less chance that it would damage the boat in any way when you are pulling it out of the water.   I think the chances of making a product that other people would like went up today.  :-)

I made this design very fast today and did not take the time to make the aluminum resemble an air-foil at all.   Doing this will reduce the drag, so it is well worth doing now that I like the basic design.

I would like to have been able to try attaching the string forward of where it was, but there was no more aluminum under the foam going forward.  In a future design I will extend the aluminum forward another 4 inches under the foam.

I seems like other hook paravanes don't have a surface following thing like my foam.  I was hoping my foam would be out of the water more and only for slow speeds but it was always part of the function.   If the foam were not touching the water there should be less drag.  So if a hook paravane can operate that way it would be better.
Posted by Vincent Cate at 5:04 PM No comments: