Tested the paravane again this morning moving the point that the line attaches to the pipe back and up a bit.   Seems to work very well.   The lines should have less chance of getting tangled.  I doubt I will use the old method of two attachment lines to make a sort of bridle ever again.

Also note that yesterday's mod of making the bottom of the pipe pull down works well.  The paravane does not come out of the water like it used to.


Posted by Vincent Cate at 6:16 AM No comments:

I used my powersander on the bottom leading edge of the PVC pipe so that is pulls down as it goes through the water.  I tested this today along the dock and the paravane now stays down in the water much better.

I also tried connecting the line directly to the side of the pipe instead of to two lines on the paravane. This works, even though I don't have the right spot yet. I just happened to have 3 holes on the pipe that were drilled in the wrong place. The right spot is a bit further back (maybe 2 or 3 inches) and a bit higher (maybe 1 or 2 inches). This will reduce the chance of lines getting twisted around something the wrong way. Probably easier to manufacture correctly too.

So maybe the Big Pipe Paravane is still a good way to go. 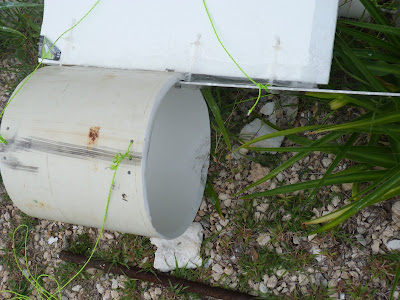 Posted by Vincent Cate at 3:23 PM No comments:

So dad was thinking about paravanes and outdoor activities for kids and came up with "Kid Paravane".  The idea is to have the kids use their body like a paravane or water kite.   We attach a rope to their life jacket and then pull.  Their goal is to angle their body so that they are pulling away from the beach enough that as I pull forward and toward the beach they stay out in the water.  My 6, 9, and 11 year olds were all able to do this.  My 4 year old declined dad's experiment.  Video below.  Note that Dad was pulling the rope and holding the camera while going backward down the beach and Youtube can only do so much to remove shake.


Posted by Vincent Cate at 9:43 AM No comments:

We went out again yesterday.   We had about 80 feet of 125 lb fishing line and 20 feet of line that is attached to the top of the mast, for about 100 feet from the paravane to the mast.

We tested the line in the office and with 8 feet of line we could stretch it about 1 foot before it snapped, so we should have about 10 feet with the 80 foot piece.   The good news is that we did not snap the line!   The bad news is that we got slack on the line and the paravane turned around in the waves before we got the slack out.  By then the two strings on the paravane had gone under and it would not straighten out.

I am thinking I will push ahead with the all aluminum catamaran paravane design as it does not have the 2 strings that could get messed up.

I am also thinking of having the line to the paravane on a fishing pole reel.  So I would just attach that to the line on the mast and then toss in the paravane.  The reel would be set to let out the line when there was enough pull.  I think this will be a much simpler procedure than what we have been doing.   It would also make it easier to reel in the line when done.

It is a bit windy this next week so we probably won't be going out again soon.

We had camera trouble so I do not have any pictures or video to show from yesterday.


We have been out on the boat twice testing a paravane.  The first two days we have only tried on one side.  While it was out the boat did seem more stable. 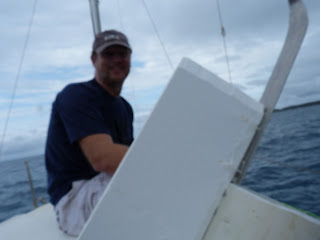 The first time the spool that I was letting the string out with broke.  The paravanes pulled so hard it snapped the plastic spool.   I had two strong lines and a short 100 lbs test line in the middle and it snapped that.  Decided to risk the mast and use the two strong strings and it snapped an aluminum carabiner.  Eric and all 4 boys are with me on this day.

The second day I used 40 feet of 100 lbs test fishing line, that will stretch,  from the mast line out.   This worked better but still broke.   We only had a paravane on one side and were outside the reef.  Nils, Ethan and Teryn were with me.   When the line breaks you can hear my cameraman Teryn say "grabber grabber grabber", "here daddy take it". He﻿ got my "paravane grabber", which most people would call a "mooring pole". :-)   It worked great for getting back the paravane.  Nice to have some boys to help out!

The basic problem is that with only one paravane the mast can tip toward it enough that the line goes slack then move away getting momentum so that when the line gets tight it snaps.

I have a matched pair of paravanes ready for testing.   The boat is in the water.  Sea trials will start as soon as a few stars align just right.  Maybe today, but if not then probably tomorrow or Friday. 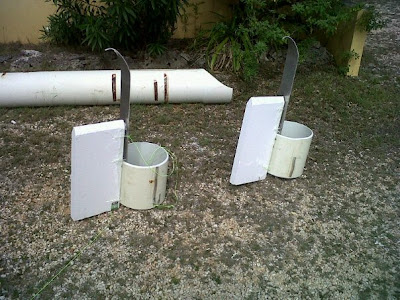 Posted by Vincent Cate at 12:07 PM No comments: